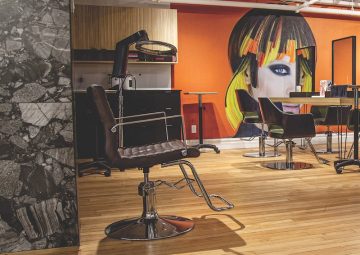 Owning a salon is a goal for many in the industry. So when it came time for Rodrigo Araneda to build his dream space—Olab par Rodrigo, in the heart of downtown Montreal—he knew exactly what he had in mind.

“I wanted to create something chic and high-end, yet youthful and warm,” he says. “It was very important for me to create an inclusive space where clients can feel welcomed.”

With any major project there can always be some unexpected turn of events. However, Araneda couldn’t have imagined that would mean a months-long delay in his salon’s construction due to the COVID-19 pandemic.

“I just bought our building, so I was very stressed about it,” he says. “When they shut down the construction, the salon was a mess, and to see all of it empty for several months was heartbreaking, but I knew I had to be strong and stay positive.” 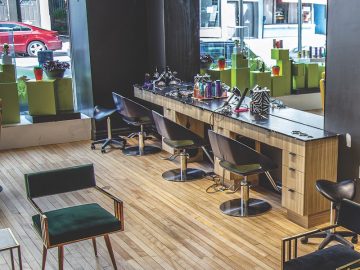 In addition, there were delays in receiving the salon’s furniture, which Araneda ordered from Italy and China—two of the countries most impacted by COVID-19.

Luckily, Araneda and the salon were in good hands, working with Lanvain who assisted in the design of the space and helped get things back on track once construction was able to resume. “I feel very lucky that I was able to finish my project,” he says. “The response from customers has been great.”

Ultimately, Araneda wanted to create a space that would truly foster creativity. As a past Contessa finalist and two-time NAHA winner, he knew the importance of designing a salon that would inspire his team. 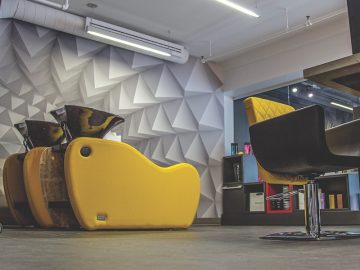 “We work in a world of colour, so colour is very important to me,” he says. “I wanted to create an energetic space with colours, shapes and different materials. I also wanted to have rich essences in the salon, so we worked with marble, leather, wood.” Among the luxurious touches include marble columns that have been added for a more opulent effect.

For each of the stations, Araneda chose high-quality Italian leather chairs by Ceriotti, which were sourced from Backstage Commerce. For the salon’s waiting area, he opted for luxe velvet chairs to infuse more pops of colour into the space. 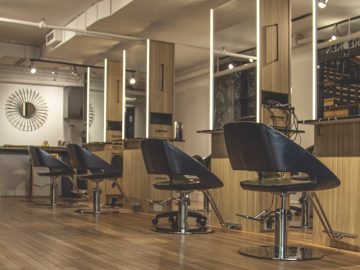 As an architecture enthusiast, Araneda also installed prints of impressive imagery throughout the space, including a “tunnel” next to the sinks. But the pièce de résistance is the salon’s staircase, which is juxtaposed with giant prints of Araneda’s 2018 NAHA-winning collection.

“The prints are young and fun, and very futuristic compared to a classic staircase,” he says. “Salons are a place of inspiration, so we can’t be scared to use colour and do things differently.”

Araneda, who has previously owned a chair rental salon, says he’s now focused on creating a more inclusive environment for his team. The salon employs three types of staff: Salaried employees, chair renters and suite renters. While suite renters typically operate independently, Araneda has created a more open-concept space, with suites located on the salon’s second floor that are separated by glass walls. 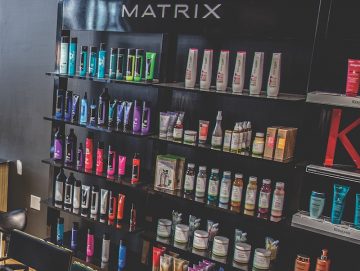 “It’s very COVID-style, with hairstylists working in suites while distancing from each other, but the suites are transparent,” he says. “I didn’t want to create suites that are completely enclosed, so now we’re all still working together and you can see each other’s work.”

The salon also features 1,200 square-foot academy, where his entire team (including chair and suite renters) are able to attend classes. As artistic director for Matrix Canada, Araneda plans to open up the space and host more classes in the future.