Two Days of Inspiration with the One and Only Trevor Sorbie!

Award-winning hairstylist and industry icon Trevor Sorbie travelled to Toronto on April 29 and Montreal on April 30 to host a special wig-cutting seminar for his My New Hair program. Presented by Pureology and Look Good Feel Better Canada, the events were held at the L’Oréal Academy in Toronto and Montreal. 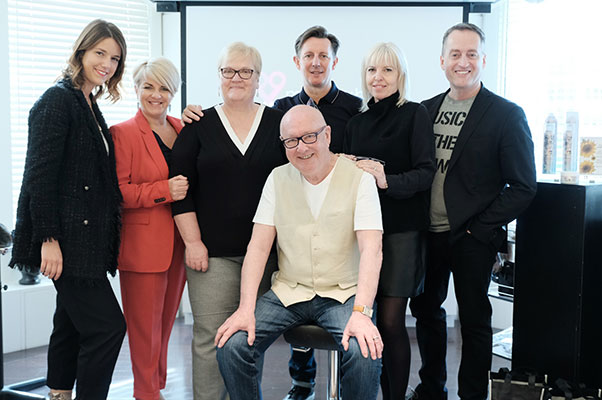 The intimate seminar began with Sorbie’s inspirational introduction, in which he opened up about his anxiety and the panic attacks he’s experienced when presenting in front of large crowds—something in which many of the attendees could relate to.

Following the introduction was an emotional video, which featured an overview of Sorbie’s non-profit organization, My New Hair. He revealed that his sister-in-law was battling cancer and how customizing a wig for her made a huge difference in her self-esteem. As he explained the importance of making wigs feel like real hair to patients undergoing chemotherapy, Sorbie’s dedication to this organization for the last 12 years has enabled him to touch the lives of many clients.

His model for the morning class was his wife Carole, who flew in with Sorbie from the U.K. He, along with British hairstylist Darren Stuart from Tribeca Hair Design demonstrated different cutting techniques on various lengths of synthetic wigs.

Sorbie provided tips on pricing, the benefits of synthetic versus human-hair wigs, their care process and more, while also showcasing his personal cutting and texturizing techniques using a razor.

Sorbie and Stuart answered questions from the audience during the live demonstrations, adding a more interactive element to the look-and-learn portion.

In the afternoon, attendees participated in a hands-on class, where they could learn and experiment with Sorbie’s wig-cutting techniques.

For more information on My New Hair, click here.