We met Jeff Pink, Founder and President of Orly

Salon sat down with Jeff Pink who was in Montreal for a trade show presented by Belmonda, one of the Canadian distributors of Orly, his highly-successful brand of nail colour and treatments. 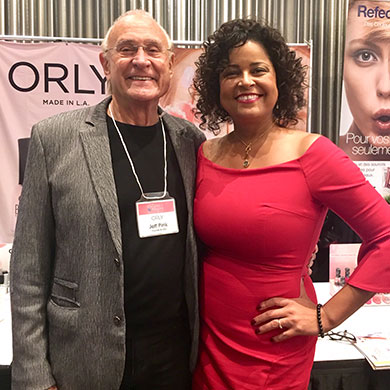 Salon: You launched your company in the 1970’s, and you’ve become a hugely successful name in the nail industry. How did you get started?

Jeff Pink: I moved to Los Angeles deciding to give the beauty industry a shot. I met the owner of a beauty supply store and made an arrangement to work with him, and I paid him to learn all about the business. But the next day I thought, “this is not for me”. However, he insisted and told me to give it at least 90 days, and it at the end I still didn’t like it, he’d give me back the $2,500 I had paid him to mentor me.

But I learned to love it, and here I am, over 40 years later!

S: What were the biggest challenges of the industry?

JP: At the time, the only nail products were nail colour, base coat and top coat. Women only classic colours: red, purple, maroon. I wanted to change the industry, to create a product that would be different. So I decided to create a nail strengthening product with nylon fibres in a transparent base coat. It became a hit overnight.

S: Tell us how you came up with the French Manicure…

JP: I used to supply Holllywood studios with nail products, and one day a director came to me and told me that because the actresses had to change nail polish between scenes to match the clothes, it took too much time for the nail products to dry. He needed a colour that matched everything. So I took a look at the white pencil we used to apply under the nails to keep them looking nice, clean and natural, and then I had this idea that we could do the same look, but with nail polish. The director loved the idea and the movie industry helped me a lot.

It was unusual to see long nails with a white tip, and celebrities started wearing the look. Barbra Streisand talked about it on a popular talk show. And so did Cher. It took six years for the French Manicure to become mainstream, but it was a big hit.

S: What are today’s challenges in the nail industry?

JP: Back then, I was the only one. I innovated many products in the industry: the first nail drier, the first cuticle treatment. Today, the challenge is that everyone copies you!

But now we’ve just launched the first Builder in a Bottle, because we felt we needed a nail extension product.

Me and my chemist developed it and it took over a year to fine-tune, and we tested it for six months. You apply it just like a nail polish but it’s a type of acrylic. You just need to put on a form on the nail and it’s self-levelling. It spreads nicely and evenly. We’ve also patented the technology.

We discovered that not every manicurist does extensions, because it requires a certain skill, but now any woman or consumer can do it herself. You remove it with acetone, like a soak-off gel. It’s a big hit right now everywhere. People love it.

S: How involved are you in your business today?

JP: I feel like I just started every day. I always come up with something unique. My sons and daughters are all involved in the company. It’s important to have a family company and a legacy.

A few big companies tried to buy me a few times, but it’s my baby and I’m not selling. We have manufacturing facilities. Everything we sell is made in L.A. in-house. There is a tradition to what we do.

S: What do you attribute your longevity to in the industry?

JP: My heart is so much into it. I love what I’m doing.