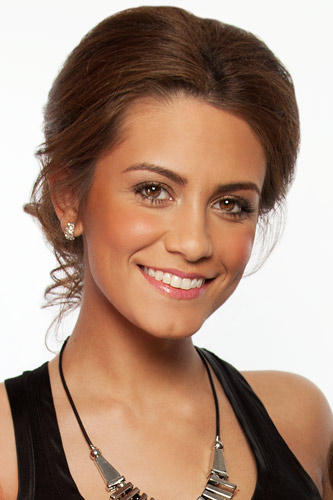 I have to admit that I’m somewhat of a reality show junkie, especially if it revolves around beauty or fashion. So I was pretty stoked to start watching Canada’s Best Beauty Talent on Sunday night. It’s the first web-only series I’ve followed, and each week’s episode is aired in two parts, on Sunday and Monday nights, roughly 12 minutes each. Episode 1, Part 1 (sounds a little like Star Wars) introduced us to the six hairstylists and six make-up artists competiting for the title.

The first challenge was interesting, especially since we didn’t see all of the artists compete. Harkening back to high school (in the words of one contestant), a so-called expert judged the most and least stylish make-up artist and hairstylist contestants. Those four were put into pairs and had to choose a fellow contestant as a model to create a “stylish look.”

When models Shab Aghajani and Andrea Tiller debuted their new looks, it was pretty clear who was going to come out ahead… But! We had to wait till Episode 1, Part 2 on Monday night for the official judging.

Andrea showed off an intricate updo that looked party ready, but that didn’t seem to go with her dramatic Cleopatra-inspired eye make-up. Shab, meanwhile, rocked a casual updo, pulled loosely back with stunning natural makeup that made her glow.

When all was said and done, Patrick and Lea were told by Coco Rocha, “You no longer have any chance to be Canada’s Best Beauty Talent. Your time to shine is over. Pack your kits.” (That’s a mouthful.)

Next week? We’ll see all the contestants show their stuff in a Hollywood icons challenge. Check it out at https://www.bestbeautytalent.com.