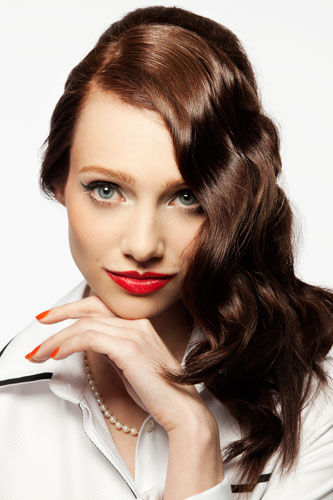 Last week, I wasn’t sure how Canada’s Best Beauty was going to go, but this week, I have to admit I loved it. (Check it out for yourself!) In fact, I wish the show was a little longer. It was so much fun to watch all of the hairstylists and makeup artists work. I would have liked to have seen more of what they were doing and how they were doing it. I wouldn’t have minded more time getting to know the contestants either.

Part of what made this episode great was the mentoring by two of this week’s judges, Eric Del Monaco, official hairstylist for L’Oreal Paris, and Eddie Malter, official makeup artist for L’Oreal Paris. They asked good questions and were able to target special elements of the styles as they talked to the contestants. In the judging room, they offered equally great feedback.

This week’s challenge was to create an updated, fresh, new look inspired by a Hollywood icon. In part one, each contestant paired up with a makeup artist and they each picked a model. Once the model was picked, she revealed which icon the team would base their inspiration on—Brigitte Bardot, Audrey Hepburn, Elizabeth Taylor, Sophia Loren or Grace Kelly.

While last week, I had a pretty good idea of who would be going home, this week was trickier. All the stylists and make-up artists did beautiful work. My predicition for the winner: the teams behind “Grace” or “Elizabeth.” Losers? The “Audrey” team of Shab and Kevin. I was partly right. Shab and Kevin went home for creating a look that was “too contrived” with hair and makeup that was “a little too much.” Marcia and Caylee’s “Elizabeth” was perfection and they took the win this week. The judges called the look “editorial,” “fantastic” and “accessible.” They clearly demonstrated an Elizabeth Taylor look “without making it a carciature.”

And with that, another week down and two more contestants gone. Agree or disagree with the judges’ decisions? Tell me in the comments below!