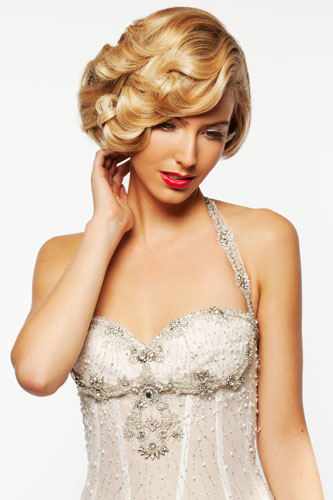 It’s always interesting in competition reality shows like this one when more people start to get eliminated. I feel like you can really start to see more of a difference in the work and get a better idea of who is going to make it all the way. After this third week, I definitely have a couple of favourites! But before I get to those, here’s what happened during this week’s bridal challenge.

First off, what a perfect theme for this time of year. The pairs from last week were broken up as the makeup and hairstylist winners each got to choose new partners. Caylee chose Cait, while Marcia chose Matthew. Once, everyone paired up, each team had to select a real-life bride and her gown for another team. Then, they had one hour to make bridal magic happen.

Among this week’s judges were the two mentors, Lora Spiga, the official makeup artist for Lancome, and a very familiar face (and Contessa winner!), the brilliant Anna Pacitto, artistic director for L’Oreal Professionnel. One of things that stood out to me was Matthew pulling out his iPhone to show his bride the type of style he was planning for her. That is such a great tool to have on hand to show clients, whether it’s on your iPhone, an iPad or if you’re a paper and pen kind of person, a scrapbook of great styles. Even set up a Pinterest page—it doesn’t get much easier than that.

After the final reveal, my money was on Matthew and Marcia for the win and I was pretty sure Isabelle and Andrea were out. Matthew and Marcia created a gorgeous look on their model. The judges raved about it—rightfully so—calling the whole look “young, sexy, fresh” and the hair “very modern, not overdone.” The makeup was a standout as well, highlighting the model’s beautiful skin.

Isabelle and Andrea—in their defense—had what seemed to be a fairly picky, opinionated model. Despite the fact her dress was ornate and rather over the top, she still wanted a strong red lip and Grace Kelly hair. The resulting style aged her, as one of the judges said, when it should have made her look younger—23 instead of 42. There was a lot going on with both hair and makeup.

For the final results, Coco asked Isabelle and Andrea to step forward, along with Jenna and Roger. A surprise, since I was pretty sure neither of them had the winning looks. In the end, Andrea, for make-up, was sent home, along with Roger for hair. And there was no winner. This was the first time an entire team wasn’t sent home, instead one member of each.

This thought had crossed my mind earlier as I thought about how some have weaker moments and how one false move could take home your partner, too. Nice to see that they’ll make the decision based on individuals’ work, not just the team as a whole.

So who do I have pegged to win? My odds are on Matthew for hair and Cait for makeup. But Marcia (makeup) and Caylee (hair) have had some great moments, especially in this episode.

Who do you think will win??