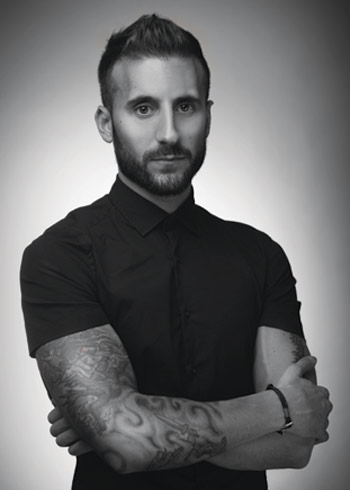 When creating his Contessa 2017 Men’s Hairstylist of the Year collection, Fabrizio Perciballi garnered inspiration from a Canadian fashion icon.

Representing Style at Any Age

“Paul Mason is an older, distinguished model who is setting the bar high in terms of being older but looking just as cool as some of the younger guys,” says Perciballi. “A lot of my inspiration came from him.

As Fashion Santa, he has created a lot of buzz and became the talk of the fashion industry.” Rather than looking to men’s hairstyling trends, Perciballi took a more classic approach. “I wanted to go with more polished looks, making a statement that style has no boundaries in terms of age,” he says. “A guy in his 60s that has four grandkids—like one of the models I had—can look just as good and get just as much attention as the 22-year-old next to him.”

Seeking a Creative Outlet to Show of Canada’s Talent

According to Perciballi, competitions have been a creative outlet for him. “You do what you feel, and you’re sending a message on how you want to create a certain look,” says Perciballi, who enjoys styling his photo shoots himself. “It’s a clean canvas. It’s not like doing an editorial and having someone dictate what the model needs to look like.” Perciballi’s passion for his craft is what continues to push him further. “I just take it day by day and give it my all,” he says. “I want to show the rest of the world the talent we have in Canada.”

Fabrizio Perciballi has more than a decade of industry experience. He is also a previous Contessa winner for Men’s Hairstylist of the Year.