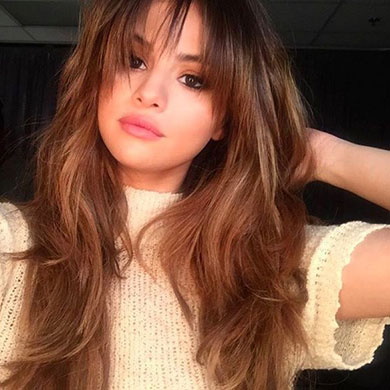 Curtain fringe is defined as any type of bangs that are shorter in the middle than they are on the sides. According to Andrew Carruthers, education director for Sam Villa, the current fringe trend is called a “long curtain fringe,” which spits in the middle and drops to much longer side-sweeping lengths on both sides.

“In addition to curtain fringe being longer, it’s also starting at or behind the highest point of the head to add more drama, so don’t be afraid to take that larger section!” said Carruthers.

1. Wrap dry hair into its natural fall before cutting to better judge length, and err on the side of caution by cutting less and choosing a length that is just barely out of the eyes in the center.

2. Don’t be intimidated to start the fringe section at or behind the high point of the head.

3. When cutting the middle, take a vertical section and a slightly over direct it to the center.  Then, point cut at 90° elevation parallel to the hair with a Sam Villa Artist Series 6.25 Shear to create soft texture.

4. For the sides, take a horizontal section with 90° elevation and a strong diagonal finger angle, and softly and deeply point cut parallel to the hair to create sides that are textured and long, but still connected to the middle fringe.

5. Finish with Redken Dry Shampoo Paste 05 to give desired separation of a paste that won’t get too oily due to the balance of the dry shampoo.